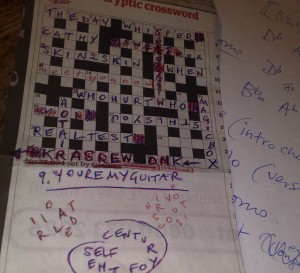 A good friend of mine recently commented on the content of a lyric I wrote a while back, for a song she’d heard several times. She had understood a part of it to mean something other than what I had intended. It was a subtle difference but her angle on it had never occurred to me!

I noticed, not for the first time, that I really enjoy having my lyrics ‘misinterpreted’ by the listener. This way I may even learn something…..about how it may be heard, how I can be even clearer another time (without losing personal poetic spontaneity), or even of the possibility of some subconscious part of me expressing which I wasn’t aware of….(well obviously, otherwise it wouldn’t be subconscious!).

Of course, I might want to clarify things if the deeper content of the words had been misconstrued. For example, if the lyric was essentially one of forgiveness, with a view to more acceptance & understanding, and then that was projected onto incongruently – in other words, say, reinterpreting it as a message of attack or condemnation – then I would almost certainly want to point out that it had not been my intention (unless it was!)…(unlikely).

Mostly though, I get a real thrill when I hear an unexpected interpretation of a song, not least for the fact that it has been taken in with enough openness to have reached someone at all – to get them thinking, and (please, thank you) feeling!

So, songwriters and poets- do you enjoy being misinterpreted? Do you learn from it?

admin
View all posts by admin →